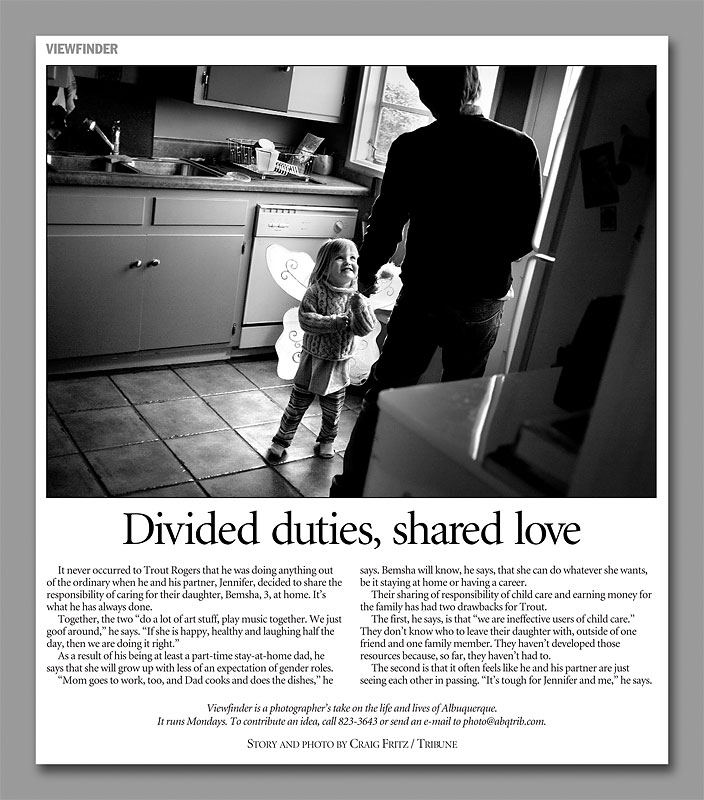 
It never occurred to Trout Rogers that he was doing anything out of the ordinary when he and his partner, Jennifer, decided to share the responsibility of caring for their daughter, Bemsha, 3, at home. It’s what he has always done.

Together, the two “do a lot of art stuff, play music together. We just goof around,” he says. “If she is happy, healthy and laughing half the day, then we are doing it right.”

As a result of his being at least a part-time stay-at-home dad, he says that she will grow up with less of an expectation of gender roles.

“Mom goes to work, too, and Dad cooks and does the dishes,” he says. Bemsha will know, he says, that she can do whatever she wants, be it staying at home or having a career.

Their sharing of responsibility of child care and earning money for the family has had two drawbacks for Trout.

The first, he says, is that “we are ineffective users of child care.” They don’t know who to leave their daughter with, outside of one friend and one family member. They haven’t developed those resources because, so far, they haven’t had to.

The second is that it often feels like he and his partner are just seeing each other in passing. “It’s tough for Jennifer and me,” he says.