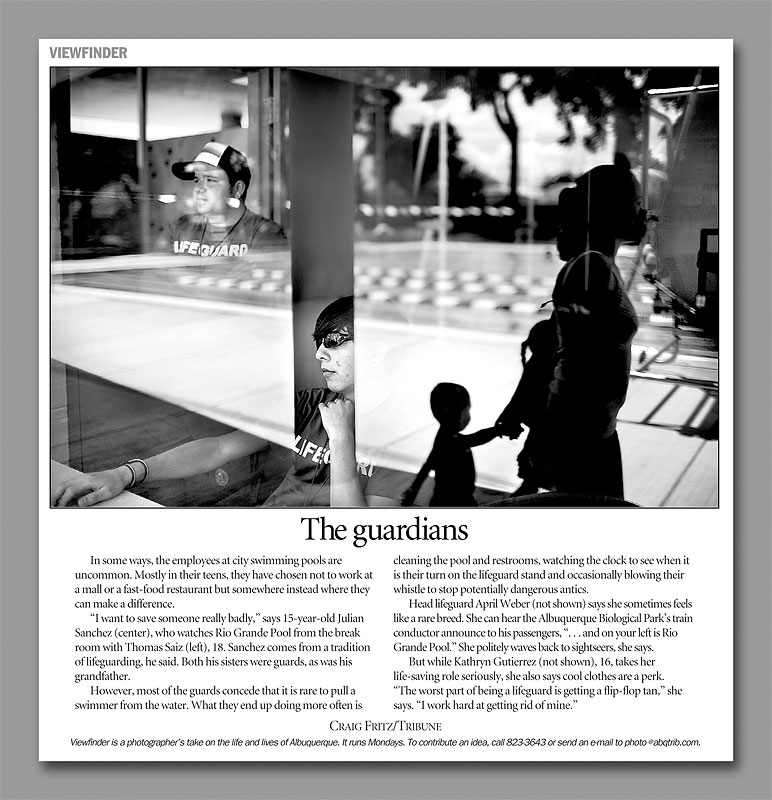 
In some ways, the employees at city swimming pools are uncommon. Mostly in their teens, they have chosen not to work at a mall or a fast-food restaurant but somewhere instead where they can make a difference.

“I want to save someone really badly,” says 15-year-old Julian Sanchez (center), who watches Rio Grande Pool from the break room with Thomas Saiz (left), 18. Sanchez comes from a tradition of lifeguarding, he said. Both his sisters were guards, as was his grandfather.

However, most of the guards concede that it is rare to pull a swimmer from the water. What they end up doing more often is cleaning the pool and restrooms, watching the clock to see when it is their turn on the lifeguard stand and occasionally blowing their whistle to stop potentially dangerous antics.

Head lifeguard April Weber (not shown) says she sometimes feels like a rare breed. She can hear the Albuquerque Biological Park’s train conductor announce to his passengers, “. . . and on your left is Rio Grande Pool.” She politely waves back to sightseers, she says.

But while Kathryn Gutierrez (not shown), 16, takes her life-saving role seriously, she also says cool clothes are a perk.

“The worst part of being a lifeguard is getting a flip-flop tan,” she says. “I work hard at getting rid of mine.”